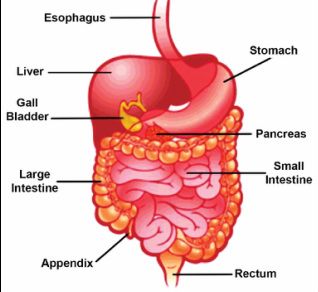 Mouth
Food begins its journey through the digestive system in the mouth, which is also known as the oral cavity.  Inside the mouth there are many accessory organs such as the tongue, teeth and salivary glands that aid in the digestion of the organism's food.  The teeth, or incisors, chop the food up into smaller pieces, and are partially dissolved by the enzymes in the animal's saliva before the tongue and other muscles push the food into the pharynx.

Stomach
The stomach is a major organ of the digestive system that looks like a muscular sac located
on the left side of the abdominal cavity, close to the diaphragm.  The stomach acts as a
storage area for food giving the body the time to digest food properly and extract all the
possible nutrients from said food.  The stomach of the Northern Flying Squirrel also contains hydrochloric acid and digestive enzymes that continues the process that the mouth started, further digesting the food.

Liver
Although the liver isn't strictly a major organ of the digestive system, it performs many  different processes and functions to support and help the process of digestion, with the main operation of the liver being to produce bile and its secretion into the small intestine.

Gallbladder
The gallbladder is a small, pear-shaped organ located somewhere in the proximity of the liver.  The gallbladder is used to store and recycle the excess bile from the small intestine so that it can be reused at a later time.

Pancreas
The pancreas is a large gland located near the stomach that plays a minor role in the digestive system.  It is used to secrete digestive enzymes into the small intestine, assisting in the chemical digestion of the food. 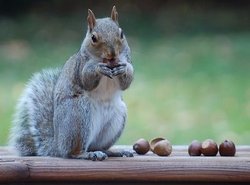 What does it eat?
A Northern Flying Squirrel's diet consists primarily of a wide variety of plants, including nuts, seeds, conifer cones, fruits, fungi and most green vegetation.  However, some squirrels are known to also consume meat
when faced with starvation, such as insects, eggs, small birds, young snakes and smaller rodents.  This makes the Northern Flying Squirrel an omnivore, as it eats both meat and vegetation; however, some squirrels of this species (especially in tropical climates) tend to sustain themselves almost entirely on a diet of insects, making them an exception to this rule.

The Food Web
The food web above shows the feeding relationships of the Northern Flying Squirrel, with the organism itself being classified (as with all types of squirrels) as a first-order consumer.  This means that the Northern Flying Squirrel eats the producer, which in this case is green vegetation and plants, but also falls prey to the second-order consumer/s, or carnivore/s, which eats the organisms situated below it on the food web.